The silver and red facade of the facility invokes Polish national colours, resembling a waving white and red flag, similarly to the seats. The painted wire mesh facade, imported from Spain, encloses an interior glass-aluminum elevation. The stadium is an open construction, which means there is a lack of permanent enclosed facade to the effect that the temperature inside is comparable to the external one despite a closed roof. The openwork facade allows for a natural ventilation of the rooms under the stands and provides daylight to them. 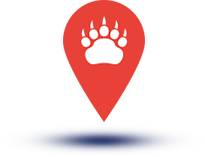